Although the coronavirus outbreak has had only a minimal impact on the video surveillance market so far, the industry still faces a risk from falling demand and a potential production bottleneck spurred by labor and component shortages in China, according to Omdia.

“Given China’s status as the world’s largest producer and consumer of video-surveillance cameras, the country wields a proportionately massive influence on the global market for these products,” said By Tommy Zhu, senior analyst, video surveillance, at Omdia. “Video surveillance equipment suppliers in China currently are contending with reduced production because of a lack of manpower and delays following the Lunar New Year. Meanwhile, domestic demand for general-purpose video surveillance products is likely to cease or suffer delays as the Chinese government focuses on coronavirus control.” 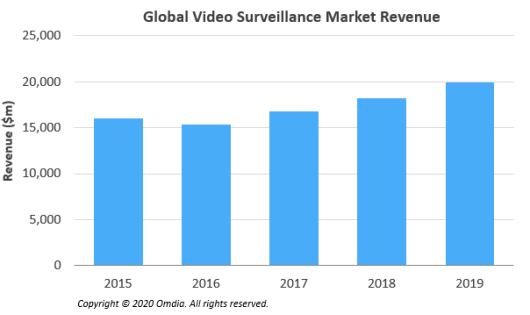 Labor pains
With the lockdown of Hubei province, severely affected neighboring areas—such as the cities of Beijing and Shanghai, and the provinces of Guangdong, Zhejiang, and Jiangsu—are taking various measures to control the spread of the epidemic. One such measure was the extension of the Chinese Spring Festival holiday—initially set to end Jan. 30—to Feb. 2, with a majority of the country’s provinces, municipalities and autonomous regions ordering businesses not to reopen until at least Feb. 10. A 14-day quarantine is also being imposed on specific sectors of the population affected by the outbreak.

Meanwhile, companies that needed to start work after the holiday were ordered to obtain permission from the government, and employees were encouraged to work from home as much as possible.

“While these labor issues have had only a minor impact so far, if the epidemic continues to spread and infections rise in number in the second quarter, the effects of the coronavirus on video surveillance hardware supply will be severe, not only in China but worldwide,” Zhu said.

Logistical nightmares
Transportation and logistics issues are having a huge impact on the supply of video surveillance equipment, given the backlog incurred before the Spring Festival, combined with new restrictions in travel and transport in place both domestically and internationally due to the coronavirus.

Component supply woes
China is home to several major suppliers of lenses, CMOS sensors and system-on-chip devices used in cameras and other video surveillance devices. These companies have now gradually returned to work after the Spring Festival holiday. However, staff shortages are possible because the epidemic may reduce the output of various components, even as the full impact of the virus is yet to be determined.

Looking forward
In the best-case scenario, with the epidemic successfully contained by the end of March and the disruptions reduced by April, the impact of the virus on the video surveillance market will be minor. However, if the epidemic continues to spread and infections rise in number in the second quarter, then the effects of the coronavirus on the video surveillance industry and on many other markets will be severe.

The Benefits of Magos Radar Over Traditional Analytics Based CCTV Systems